Which two are features of IPv6? (Choose two)

Which of the following statements describe the network shown in the graphic? (Choose two)

A. There are two broadcast domains in the network.

B. There are four broadcast domains in the network.

C. There are six broadcast domains in the network.

D. There are four collision domains in the network.

E. There are five collision domains in the network.

F. There are seven collision domains in the network.

Which two commands can be used to verify a trunk link configuration status on a given Cisco switch interface? (Choose two)

How can you solve congestion issues from multiple links aggregating on a switch without scaling issues?

A. Increase the uplink speed

B. Decrease the uplink speed

Which of the following commands best allows you to verify the link status of a MLP link?

High levels of humidity pose a danger to the devices in your network.
What type of threat is this categorized as?

Which command is used to apply an ACL to an interface?

Which Cisco IOS router prompt indicates that you are in Global Configuration mode?

Which is the Hello and Dead interval with a Gigabit Ethernet connection for a BROADCAST Network type with IPv6 by default?

What is the Administrative Distance of internal EIGRP routes?

Which command is used to verify your OSPFv3 neighbor adjacencies?

Which commands are used to statically assign an IPv6 address to a device using a manual interface ID? (Choose two)

Which IPv6 header field specifies the maximum number of hops that an IPv6 packet can take?

B. Time to live

Which port state is introduced by Rapid-PVST?

Which microcode is used to test the basic functionality of router hardware and determine which components are present?

In a switched environment, what does the IEEE 802.1Q standard describe?

A. the operation of VTP

B. a method of VLAN trunking

How does the “traceroute” command allow you to verify if you have connectivity? (Choose two)

A. It generates a list of IPv6 hops that successfully reached along the path

B. It tests the transport layer connectivity for any TCP port

C. It allows observation of the path between two hosts

D. It does the same as ARP in IPv4

Which statement about VLAN operation on Cisco Catalyst switches is true?

A. When a packet is received from an 802.1Q trunk, the VLAN ID can be determined from the source MAC address and the MAC address table.

B. Unknown unicast frames are retransmitted only to the ports that belong to the same VLAN.

C. Broadcast and multicast frames are retransmitted to ports that are configured on different VLAN.

D. Ports between switches should be configured in access mode so that VLANs can span across the ports.

What are the two types of authentication methods for PPP? (Choose two)

While determining the best route and any backup routes to a destination, what parameter does EIGRP use to determine the metric for a neighbor to reach a particular network?

You need to create a standard IPv4 ACL entry that will deny all packets sourced from the Class C private IP address space.
Which of these options is the correct ACL entry?

Which type of unicast address is automatically configured on all interfaces that are enabled for IPv6?

A. Create a default route to R2, in case R1 goes down

B. Ensure that the same priority is assigned to R1 and R2

C. Ensure that it is assigned the virtual default gateway

D. Ensure that it is configured with two default gateways

How does EIGRP determine the bandwidth and delay used in calculating its metric? (Choose two)

A. It uses the worst reliability between the source and destination

B. It uses the lowest bandwidth between the source and destination

C. It uses the amount of time it takes to move information from the source to the destination

D. It uses the cumulative bandwidth between the source and destination

Which code represents a route inside an area in which it belongs?

What are the possible consequences of an STP failure? (Choose two)

A. Only the users that are directly connected to the switch will be affected

B. Every port will transition to a blocking state

C. The load on all links in the switched LAN quickly starts increasing

D. Due to very high load for the CPU, the switch becomes unreachable

Which device is responsible for translating the private IPv4 address to a public IPv4 address when using static NAT?

If you choose to connect to your service provider using a T1, which of the following is needed?

How does the static default route appear in the routing table for IPv6?

What are the characteristics of a network ID as against an IP address? (Choose two)

A. Identifies the individual host

B. Identifies the network the host device belongs to

D. Used by routers to maintain information about routes

Which command can be used to prevent syslog messages from interrupting the commands that you are currently typing in?

What guidelines must be followed to successfully form an EtherChannel bundle? (Choose two)

A. The same duplex setting must be used

B. A mixture of access ports and trunk ports can be used

C. Every link that’s going to bundled together must be using the exact same speed

D. The native VLAN can differ for every port that is being placed into that bundle

For what two purposes does the Ethernet protocol use physical addresses? (Choose two)

A. to uniquely identify devices at Layer 2

B. to allow communication with devices on a different network

C. to differentiate a Layer 2 frame from a Layer 3 packet

D. to establish a priority system to determine which device gets to transmit first

E. to allow communication between different devices on the same network

F. to allow detection of a remote device when its physical address is unknown

What value is primarily used to determine which port becomes the root port on each nonroot switch in a spanning-tree topology?

Within a deny statement for an IPv6 ACL, what are the possible values for the prefix? (Choose two)

B. Wildcard for the source

C. Any prefix as an abbreviation for the IPv6 prefix ::/0

D. Name or number of an Internet protocol

Which priority value should you set for a switch to give it the best chance of remaining as a root bridge in the long term?

You are configuring your Cisco IOS Router. You need to setup a password to control access to privilege EXEC mode.
Which commands can you use to accomplish this? (Choose two)

What can VLANs be used for? (Choose two)

A. To maximize device resources

B. To segment a physical switch into logical broadcast domains

C. To prevent specific protocols from entering your network

D. To eliminate the need for routers

Which features are used to extend the lifetime and usefulness of IPv4 networks? (Choose four)

Which physical layer media is not susceptible to electromagnetic interference?

Refer to the exhibit. All switch ports are assigned to the correct VLANs, but none of the hosts connected to SwitchA can communicate with hosts in the same VLAN connected to SwitchB. Based on the output shown, what is the most likely problem? 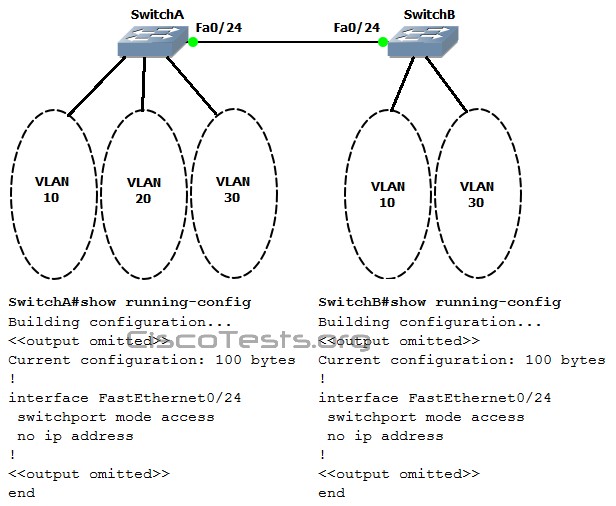 A. The access link needs to be configured in multiple VLANs.

B. The link between the switches is configured in the wrong VLAN.

C. The link between the switches needs to be configured as a trunk.

D. VTP is not configured to carry VLAN information between the switches.

E. Switch IP addresses must be configured in order for traffic to be forwarded between the switches.

You need to configure your 2960 Catalyst switch to automatically recover a port within one minute that has been placed in the err-disabled state because too many MAC addresses were learned on an interface.
Which commands will accomplish this for you? (Choose two)

What are the considerations when using Cisco PVST+? (Choose two)

A. You can manipulate spanning-tree topologies on a VLAN-by-VLAN basis

B. There is only one spanning-tree instance for the entire switched network

C. It does not allow load sharing or balancing

You are subnetting the 172.16.0.0/16 network so that you have 100 subnets.
How many bits do you need to borrow, what is the new subnet mask, and how many hosts will be in each subnet? (Choose three)

A. There will be 254 possible hosts in each subnet

B. There will be 510 possible hosts in each subnet

D. 7 bits will be borrowed

E. 8 bits will be borrowed

What is the best definition of a WAN?

A. Remote access to resources across a high speed link

What is the purpose of the “logging synchronous” command?

A. It enables synchronous sequence numbering for syslog messages

B. It enables password checking on the vty and console lines

C. It sets an inactivity timer for the console and vty lines

D. It prevents syslog messages from interrupting current commands you are typing in

What protocol is used to synchronize time between various Cisco IOS devices in your network?

What are the two main functions of a router? (Choose two)

A. Determine the optimal path to forward packets and store the decision in a routing table

B. Determine the optimal path to forward frames and store the decision in a MAC address table

C. Forward frames based on entries in a MAC address table

D. Forward packets based on entries in a routing table

Refer to the exhibit. Given the output shown from this Cisco Catalyst 2950, what is the reason that interface FastEthernet 0/10 is not the root port for VLAN 2?

A. This switch has more than one interface connected to the root network segment in VLAN 2.

C. This switch interface has a higher path cost to the root bridge than another in the topology.

D. This switch has a lower bridge ID for VLAN 2 than the elected designated switch.

When operating in trunk mode, what command is used to shut off DTP?

Which switch would STP choose to become the root bridge in the selection process?