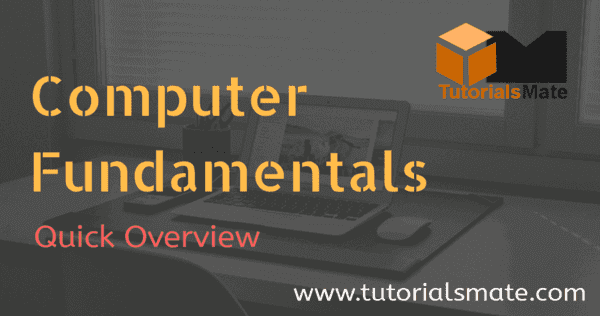 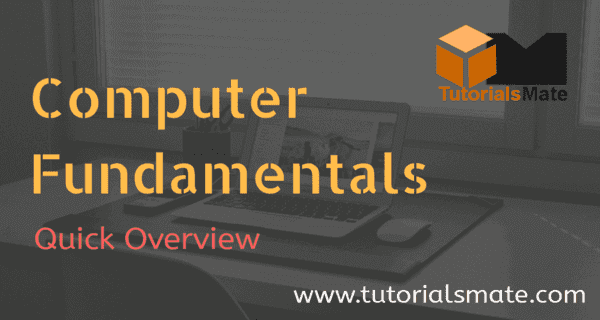 Computers have become one of the most essential parts of human life. At present, computers can be easily seen in almost every sector or field even where it is most unexpected. There can be several different reasons why computers are actually required. We can summarize the reasons for the requirement of computers in three words: efficiency, accuracy, and reliability.

Nowadays, computers are making jobs easier for people. Computers can be used in everything from entertainment to communication to navigation to research. That is why this era is called the era of IT (Information Technology). And now, one cannot imagine a world without computers.

There is no special requirement to learn the concepts of Computer fundamentals Tutorial. You just need to read the article properly. We have a well built and organized series of topics under Computer Fundamentals to help you in learning computer concepts from scratch.

Tutorials on TutorialsMate are designed to help beginners and professionals. Our Computer Fundamentals Tutorial will help beginners to master in Computer.

Our Computer Fundamentals Tutorial is designed by professionals, and we assure you that you will not find any kind of problem. In case there is any mistake, we request you to submit the problem using the contact form or directly send us a mail at TutorialsMate.

What You Will Learn

Let’s start with the definition:

In 1640, the term ‘Computer’ was initially referred to as ‘one who calculates’. Later in 1897, it was called the ‘Calculating Machine’. In 1945, it was indicated as ‘programmable digital electronic computer’ which is now called a ‘computer’.


What is Computer definition?

“A computer is a programmable electronic machine designed to take input, perform prescribed arithmetic and logical operations at fast speeds, and provide the output of these operations.”

The term ‘COMPUTER’ is an acronym for ‘Common Operating Machine Purposely Used for Technological and Educational Research’.

The term ‘Computer’ is derived from the Latin word ‘computare’, which is defined as- “to calculate”, “to count” or ‘to sum up”, etc. In other words, “a computer is a device that performs computation”.

Note– The first mechanical computer was designed in 1837 by Charles Babbage. It was called ‘Analytical Engine‘. It was the first general-purpose computer. Charles Babbage is known as the father of the computer.

There are four basic functions of the computer: Input, Processing, Output, and Storage.

The data is entered into the computer with the help of input devices. Like other electronic devices, a computer takes data in raw form (binary form). The user can enter the data in several formats such as the collection of letters, numbers, images, etc. The input devices convert the data in the binary form so that the computer can read the data.

Some of the main input devices of computer systems are listed below:

The processing is the core functionality of the computer system. It is the internal process where the data is processed according to the instructions given to the computer. The data is executed sequentially and sent for further processing.

The processing speed may vary in different computer systems as the speed mainly depends upon factors like which type of Motherboard, CPU (Central Processing Unit) or RAM (Random Access Memory) you are using.

The output is the information provided by the computer after the entire processing. It is also known as the result that can be stored in the storage devices for further use. The output devices retrieve the processed data from the computer and convert the data into a human-readable form.

The widely used output devices of computer systems are listed below:

Storage is a crucial part of the computer system. It is used to store data or instructions before and after processing.

Generally, storage is divided into the following types:

Primary storage devices store the inputted data and immediate calculation results. The data stored in primary storage is temporary and will be lost if they are disconnected from the power source. Random Access Memory is an example of primary storage.

Each generation of computers is a major technological development in technology a computer is/was being based on. Initially, the term ‘generation of computer’ was used to distinguish between different hardware technologies. At present, the term concludes both the hardware and software. More precisely, the term ‘generation’ is the development that changes the way computers operate. There can be different changes like making the device smaller, cheaper, more smart or powerful, etc.

There are five generations of the computer, which are listed below with approximate period:

As we have discussed above, the computer is the need for the digital era. It is helping people to complete their tasks in hours that were before taking several days or months.

Here, we have explained the most important uses of the computer system:

According to usage and functionalities, computers can be classified as:

Supercomputer – Supercomputers are large and require huge space for the installation. They are the fastest and most expensive computers compared to others. They are used for performing huge complex calculations.

Mainframe Computer – Mainframe Computers are smaller than supercomputers, still, they comparatively huge. These are not as fast as supercomputers. These are expensive as well as take huge space for the entire setup. Mainframe computers can store huge amounts of data and they are capable to handle large calculations. These computers are usually found in banks and educational sectors.

Mini Computer – Mini computers are cheaper and easy to carry. Notebook and Tablet are examples of minicomputers. 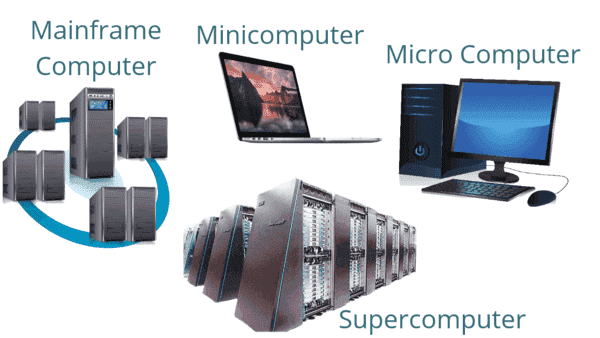 Advantages and Disadvantages of Computer

The main advantages of the system are listed below:

The main disadvantages of the computer system are listed below:

• Negative Impact on the Environment

Computer software is a group of programming instructions designed to instruct the computer to perform specific tasks. Typically, a computer system is useless without software.
There are two types of computer software, as mentioned below:

Application software are customized software designed for personal use. These type of software help users for performing basic tasks such as online research, setting an alarm, designing, or even playing games. The application software runs in the frontend and mostly used by the end-users. Therefore, these are also called ‘end-user programs’.


Components of the Computer Hardware

The basic components of the computer hardware are listed below: 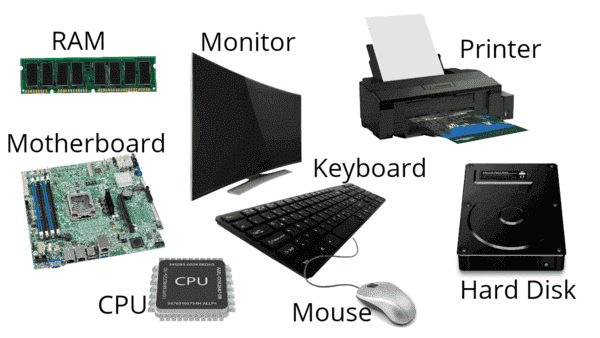