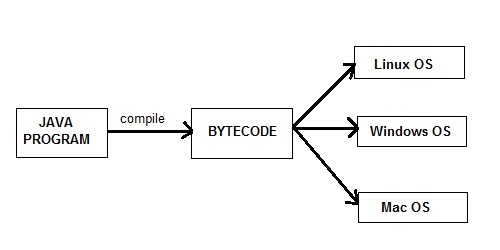 The prime reason behind creation of Java was to bring portability and security feature into a computer language. Beside these two major features, there were many other features that played an important role in moulding out the final form of this outstanding language. Those features are :

Java is easy to learn and its syntax is quite simple, clean and easy to understand.The confusing and ambiguous concepts of C++ are either left out in Java or they have been re-implemented in a cleaner way.

Eg : Pointers and Operator Overloading are not there in java but were an important part of C++.

In java, everything is an object which has some data and behaviour. Java can be easily extended as it is based on Object Model. Following are some basic concept of OOP’s.

Unlike other programming languages such as C, C++ etc which are compiled into platform specific machines. Java is guaranteed to be write-once, run-anywhere language.

On compilation Java program is compiled into bytecode. This bytecode is platform independent and can be run on any machine, plus this bytecode format also provide security. Any machine with Java Runtime Environment can run Java Programs.

When it comes to security, Java is always the first choice. With java secure features it enable us to develop virus free, temper free system. Java program always runs in Java runtime environment with almost null interaction with system OS, hence it is more secure.

Java multithreading feature makes it possible to write program that can do many tasks simultaneously. Benefit of multithreading is that it utilizes same memory and other resources to execute multiple threads at the same time, like While typing, grammatical errors are checked along.

Compiler generates bytecodes, which have nothing to do with a particular computer architecture, hence a Java program is easy to intrepret on any machine.

Java Byte code can be carried to any platform. No implementation dependent features. Everything related to storage is predefined, example: size of primitive data types

Java is an interpreted language, so it will never be as fast as a compiled language like C or C++. But, Java enables high performance with the use of just-in-time compiler.

Java is also a distributed language. Programs can be designed to run on computer networks. Java has a special class library for communicating using TCP/IP protocols. Creating network connections is very much easy in Java as compared to C/C++.

Below mentioned are some of the core upgrades done as a part of Java 8 release. Just go through them quickly, we will explore them in details later.

Java 11 is a recommended LTS version of Java that includes various important features. These features includes new and upgrades in existing topic. Just go through them quickly, we will explore them in details later.

Java Editions or we can say the platform is a collection of programs which helps to develop and run the programs that are written in Java Programming language. Java Editions includes execution engine, compiler and set of libraries. As Java is Platform independent language so it is not specific to any processor or operating system.

JavaFX is used for creating desktop applications and also rich internet applications(RIAs) which can be run on a wide variety of devices. JavaFX has almost replaced Swing as the standard GUI library for Java Standard Edition. JavaFX support for desktop computers and web browsers.