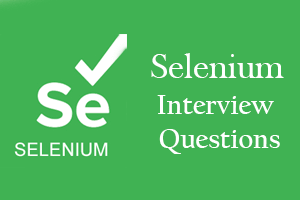 Selenium is based on automating web applications for testing purpose, but it is certainly not limited to just that. The web-based administration tasks can be automated as well. It automates browsers

Selenium has the support of some of the leading browser vendors who have adopted it to make Selenium an essential part of their browser. It is also the core technology in many other browser automation tools, APIs, and frameworks.

A list of most frequently asked Selenium interview questions, and their answers are given below.

2) What are the advantages of automation testing?

Some basic Advantages of automation testing are as follows.

3) Name some of the commonly used Automation Testing tools that are used for Functional Automation.

Lists of top 10 used automation testing tools for Functional Automation are as follows.

4) Name some of the commonly used Automation Testing tools that are used for Non-Functional Automation.

Lists of some commonly used Automation Testing tools for Non-Functional Automation are as follows.

Selenium is a portable framework for software testing. Selenium tool facilitates with a playback tool for authoring functional tests without the need to learn a test scripting language.

6) What are the different components of Selenium?

Selenium is not just a single tool but a suite of software’s, each having a different approach to support automation testing. It comprises of four major components which include:

7) List out the names of programming languages, browsers and operating systems that are supported by Selenium.

8) What are the significant changes/upgrades in various Selenium versions?

9) List some of the test types that are supported by Selenium.

Different types of testing’s that we can achieve through Selenium are.

Selenium IDE is implemented as Firefox extension which provides record and playback functionality on test scripts. It allows testers to export recorded scripts in many languages like HTML, Java, Ruby, RSpec, Python, C#, JUnit and TestNG.

Selenium IDE has limited scope, and the generated test scripts are not very robust, and portable.

Selenium commands, also known as “Selenese” are the set of commands used in Selenium that run your tests. For example, command – open (URL); launches the desired URL in the specified browser and it accept both relative and absolute URLs.

A sequence of Selenium commands (Selenese) together is known as a test script.

12) What are the different ways of locating a web element in Selenium?

In Selenium, web elements are identified and located with the help of Locators. Locators specify a target location which uniquely defines the web element in the context of a web application. Thus, to identify web elements accurately and precisely we have different types of locators in Selenium:

13) How many types of WebDriver API’s are available in Selenium?

The list of WebDriver API’s which are used to automate browser include:

14) List out some of the Automation tools which could be integrated with Selenium to achieve continuous testing.

15) What do you mean by the assertion in Selenium?

The assertion is used as a verification point. It verifies that the state of the application conforms to what is expected. The types of assertion are “assert”, “verify” and “waitFor”.

16) Explain the difference between assert and verify commands?

Verify: Verify command also checks if the given condition is true or false. It doesn’t halt program execution, i.e., any failure during verification would not stop the execution, and all the test phases would be executed.

XPath is also defined as XML Path. It is a language used to query XML documents. It is an important approach to locate elements in Selenium. XPath consists of a path expression along with some conditions. Here, we can easily write XPath script/query to locate any element in the webpage. It is developed to allow the navigation of XML documents. The key factors that it considered while navigating are selecting individual elements, attributes, or some other part of an XML document for specific processing. It also produces reliable locators. Some other points about XPath are as follows.

Double Slash “//”: Double slash is used to create XPath with the relative path.

20) What are the different types of annotations which are used in Selenium?

JUnit annotations which can be used are:

21) What are the WebDriver supported Mobile Testing Drivers?

22) What are the popular programming languages supported by Selenium WebDriver to write Test Cases?

Selenium WebDriver supports the below languages to write Test Cases.

23) What is the difference between type keys and type commands?

TypeKeys() will trigger JavaScript event in most of the cases whereas .type() won’t.

24) What is the difference between “type” and “typeAndWait” command?

“type” command is used to type keyboard key values into the text box of software web application. It can also be used for selecting values of combo box whereas “typeAndWait” command is used when your typing is completed and software web page start reloading. This command will wait for software application page to reload. If there is no page reload event on typing, you have to use a simple “type” command.

findElement(): It is used to find the first element within the current page using the given “locating mechanism”. It returns a single WebElement.

findElements(): It uses the given “locating mechanism” to find all the elements within the current page. It returns a list of web elements.

26) What is the wait? How many types of waits in selenium?

Selenium Webdriver introduces the concept of waits for the AJAX-based application. There are two types of waits:

27) What is the main disadvantage of implicit wait?

The main disadvantage of implicit wait is that it slows down test performance.

Another disadvantage of implicit wait is:

Suppose, you set the waiting limit to be 10 seconds, and the elements appear in the DOM in 11 seconds, your tests will be failed because you told it to wait a maximum of 10 seconds.

Selenium Grid facilitates you to distribute your tests on multiple machines and all of them at the same time. So, you can execute tests on Internet Explorer on Windows and Safari on Mac machine using the same text script. It reduces the time of test execution and provides quick feedback.

29) How can we launch different browsers in Selenium WebDriver?

We have to create an instance of a driver of that particular browser.

Here, “WebDriver” is an interface, and we are creating a reference variable “driver” of type WebDriver, instantiated using “FireFoxDriver” class.

30) Write a code snippet to launch Firefox browser in WebDriver.

31) Write a code snippet to launch Chrome browser in WebDriver.

33) Write a code snippet to perform right-click an element in WebDriver.

We will use Action class to generate user event like right-click an element in WebDriver.

34) Write a code snippet to perform mouse hover in WebDriver.

35) How do you perform drag and drop operation in WebDriver?

36) What are the different methods to refresh a web page in WebDriver?

There are multiple ways of refreshing a page in Webdriver.

4. Pressing an F5 key on any textbox using the sendKeys command –

37) Write a code snippet to navigate back and forward in browser history?

Navigate back in browser history:

38) How to invoke an application in WebDriver?

39) What are the benefits of Automation Testing?

Benefits of Automation testing are as follows.

Get command is used to get the inner text of the specified web element. The get command doesn’t require any parameter, but it returns a string type value. It is also one of the widely used commands for verification of messages, labels, and errors,etc.,from web pages.

41) How to select value in a dropdown?

We use the WebDriver’s Select class to select the value in the dropdown.

42) What are the different types of navigation commands?

The navigation commands are as follows.

The above command needs no parameters and takes back the user to the previous webpage.

The above command allows the user to navigate to the next web page with reference to the browser’s history.

The navigate().refresh() command allows the user to refresh the current web page by reloading all the web elements.

The navigate().to() command allows the user to launch a new web browser window and navigate to the specified URL.

43) How to deal with frame in WebDriver?

An inline frame abbreviates as an iframe. It is used to insert another document within the current document. These document can be HTML document or simply web page and nested web page.

44) Is there an HtmlUnitDriver for .NET?

To use HtmlUnit first use the RemoteWebDriver and pass it in the desired capabilities.

For the Firefox implementation to run, use

45) How can you redirect browsing from a browser through some proxy?

Selenium facilitates with a PROXY class to redirect browsing from a proxy. Look at the example below.

46) What is POM (Page Object Model)? What are its advantages?

Page Object Model is a design pattern for creating an Object directory for web UI elements. Each web page is required to have its page class. The page class is responsible for finding the WebElements in web pages and then perform operations on WebElements.

The benefits of using POM are as follows.

47) How to capture screenshot in WebDriver?

Below is the program to capture screenshot in WebDriver.

48) How to type text in a textbox using Selenium?

The sendKeys(“String to be entered”) is used to enter the string in a textbox.

49) How can you find if an element is displayed on the screen?

WebDriver allows user to check the visibility of the web elements. These web elements can be buttons, radio buttons, drop, checkboxes, boxes, labels etc. which are used with the following methods.

50) How to click on a hyper link using linkText?

The above command search the element using a link text, then click on that element and thus the user will be re-directed to the corresponding page.

The following command can access the link mentioned earlier.

The above-given command searches the element based on the substring of the link provided in the parenthesis. And after that partialLinkText() finds the web element with the specified substring and then clicks on it.