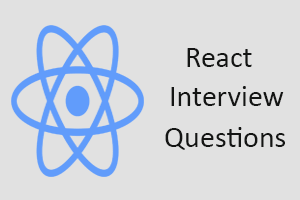 A list of top frequently asked React Interview Questions and Answers are given below.

React is a declarative, efficient, flexible open source front-end JavaScript library developed by Facebook in 2011. It follows the component-based approach for building reusable UI components, especially for single page application. It is used for developing interactive view layer of web and mobile apps. It was created by Jordan Walke, a software engineer at Facebook. It was initially deployed on Facebook’s News Feed section in 2011 and later used in its products like WhatsApp & Instagram.

2) What are the features of React?

React framework gaining quick popularity as the best framework among web developers. The main features of React are:

3) What are the advantages of React?

The advantages of React are:

4) What are the limitations of React?

The limitations of React are:

JSX stands for JavaScript XML. It is a React extension which allows writing JavaScript code that looks similar to HTML. It makes HTML file easy to understand. The JSX file makes the React application robust and boosts its performance. JSX provides you to write XML-like syntax in the same file where you write JavaScript code, and then preprocessor (i.e., transpilers like Babel) transform these expressions into actual JavaScript code. Just like XML/HTML, JSX tags have a tag name, attributes, and children.

In the above example, text inside

8) What do you understand by Virtual DOM?

A Virtual DOM is a lightweight JavaScript object which is an in-memory representation of real DOM. It is an intermediary step between the render function being called and the displaying of elements on the screen. It is similar to a node tree which lists the elements, their attributes, and content as objects and their properties. The render function creates a node tree of the React components and then updates this node tree in response to the mutations in the data model caused by various actions done by the user or by the system.

9) Explain the working of Virtual DOM.

1. Whenever any data changes in the React App, the entire UI is re-rendered in Virtual DOM representation. 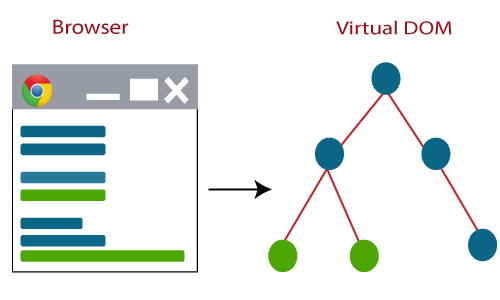 2. Now, the difference between the previous DOM representation and the new DOM is calculated.

3. Once the calculations are completed, the real DOM updated with only those things which are changed. 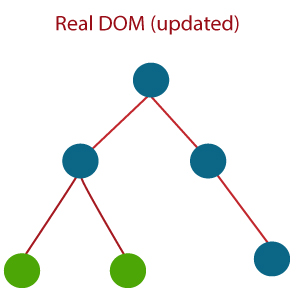 10) How is React different from Angular?

The React is different from Angular in the following ways.

11) How React’s ES6 syntax is different from ES5 syntax?

The React’s ES6 syntax has changed from ES5 syntax in the following aspects.

12) What is the difference between ReactJS and React Native?

The main differences between ReactJS and React Native are given below.

13) What do you understand from “In React, everything is a component.”

14) Explain the purpose of render() in React.

It is mandatory for each React component to have a render() function. Render function is used to return the HTML which you want to display in a component. If you need to rendered more than one HTML element, you need to grouped together inside single enclosing tag (parent tag) such as